In the poem Duel in Death Valley, Rafael Argullol creates his own personal mythical scenery where the figures of beauty and decline, of love and immortality, intertwine in a tense, ruthless combat. The landscapes of the beautiful and desolate Death Valley, subject to a poetical metamorphosis, acquire metaphysical dimensions in which the confrontation between human desire and its sentry deniers takes place. The memory of things, the succession of days and passions, the invocation of a relived yesterday revolve, like a feverish cosmos, around an insurmountable uncertainty. But in the middle of this vertigo, testimony of a conviction that defies uncertainty, there remains the venerated image of a man who, when defeating the temptation of the void, is able to defeat himself. 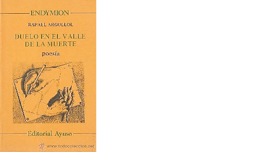